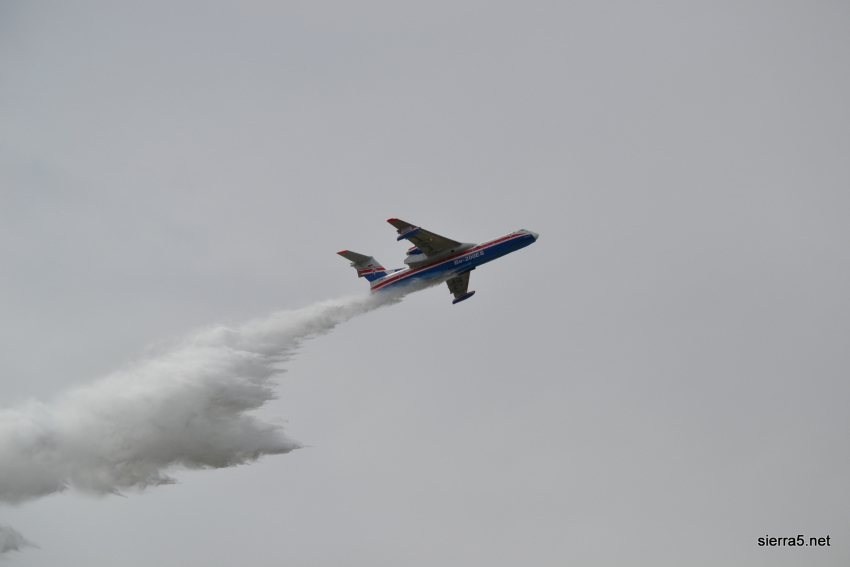 After a long development and a low rate initial production, the aircraft finally gained some export successes.

One of the most exotic planes at the Paris Air Show last June was for sure the Beriev Be-200ES. The aircraft was on static display and performed daily flight displays, during which it also delivered an impressive 12t load of water over Le Bourget airport, while simulating a firefighting operation.

The Beriev 200 program originates in some studies made starting from 1989 for a new water bomber. The first flight took place in 1998 and since then 15 aircraft were produced. The main customer of the Beriev Be-200 is the Russian Ministry of Emergency Situations (EMERCOM) with a fleet of 12. All are in the dedicated version Be-200ES. Four planes are based in the Krasnoyarsk Air Rescue Centre in Siberia, four in the Southern Regional Air Rescue Centre in Rostov-on-Don and four in the Russian Far east at Khabarovsk Integrated Air Rescue Centre. The first six Be-200ES were built by Irkut in Irkutsk, then the production moved to Taganrog. The last aircraft was delivered to EMERCOM on 27th February 2019, additional two were delivered in 2018. 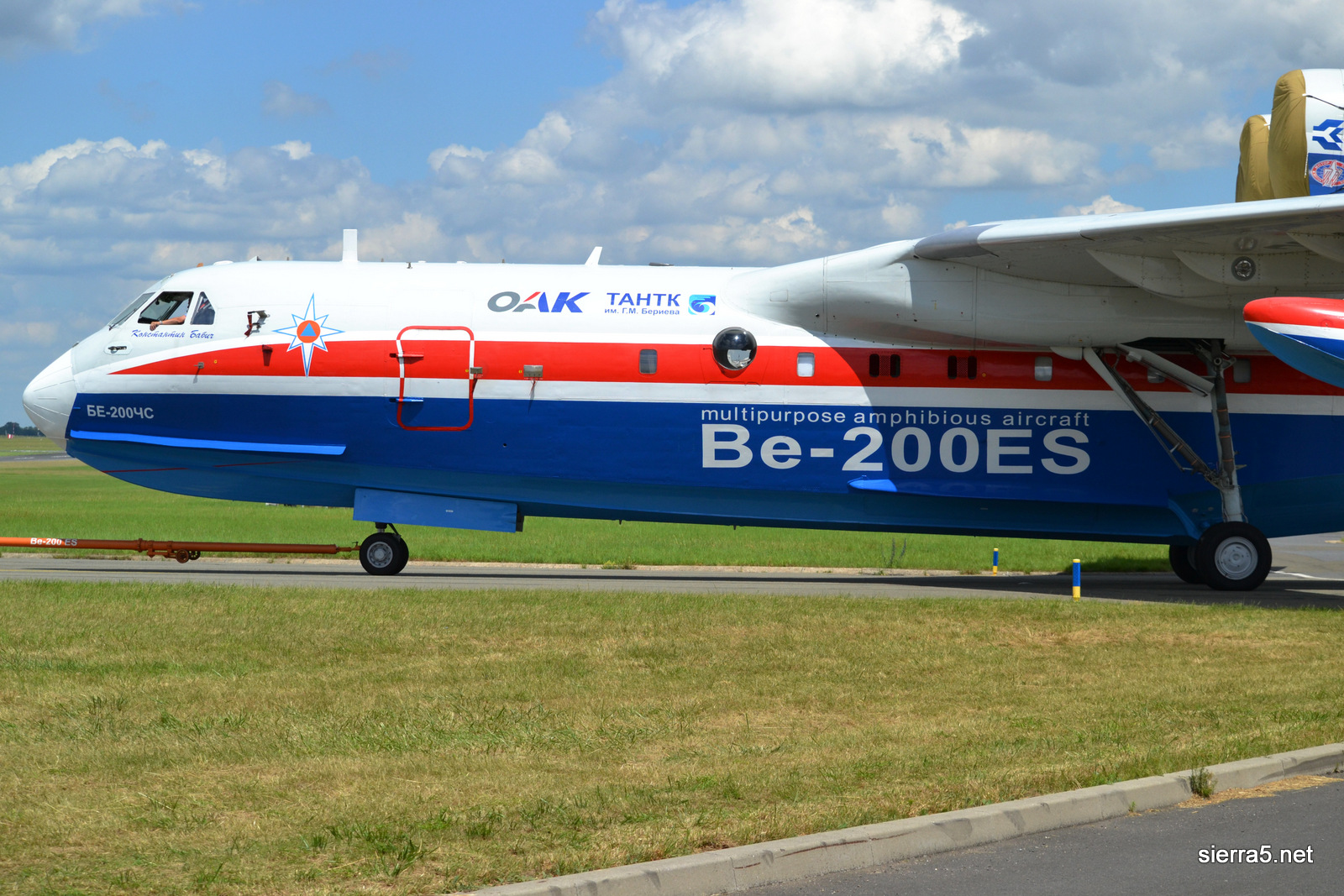 The Beriev Be-200ES can carry up to 12.000 litres of water or fire retardant, the water can be scooped in just 14 seconds. The minimum drop speed is 200 km/h while the economic cruising speed is 560 km/h at 8.000 m (max cruising speed 700 km/h). The maximum range at 8000 m with one hour of fuel reserve is 3.300 km, the average fuel consumption is 1.500 kg per hour. The aircraft can be used also in SAR missions, patrolling, as air ambulance or to carry passengers or cargo.

As a firefighter, the Beriev Be-200 was already used in various countries. In summer 2004 one aircraft was sent for evaluations in Italy where it returned also the following year, dropping a total of almost 4.000 t of water over wildfires. However the Italian Civil Defense Department did not place an order for it, preferring not to expand their fleet of CL-415 with a new type of aircraft. The Beriev Be-200 was successfully used in firefighting missions also in China, France, Germany, Greece, Malesia, Indonesia, Israel, Portugal, Serbia and, of course, Russia. In 2008 Beriev received the first foreign order from Azerbaijan. The country operates one Be-200ES. The first export success was not so soon followed by new orders. The Chinese company Leader Energy Aircraft Manufacturing signed a contract for two BE-200 and two options in 2017.

During the Gidroaviasalon, that took place in Gelendzhik last year, the Russians achieved two new orders from Asesorias CBP, a Chilean company (two Be-200ES and three options) and with Seaplane Global Air Services of the United States (four Be-200ES with six options). During this year Paris Air Show Asesorias CBP announced that will extend its order for two more aircraft, to be delivered in 2020 and 2021. Three planes are already under construction and to be delivered during this year (one for an export customer and two for the Russian naval aviation). However there were no reports on the last order, just some mentions on Russian and specialized media.

Beriev at Le Bourget signed also a MOI with some Indian partners interested in purchasing the Be-200 for transporting passengers.

Being the luck on my side I had the privilege of visiting the Be-200ES on static display at the Paris Air Show.

The cockpit features a modern glass cockpit, but when you see that green background color there are no doubts that’s still a Russian plane. 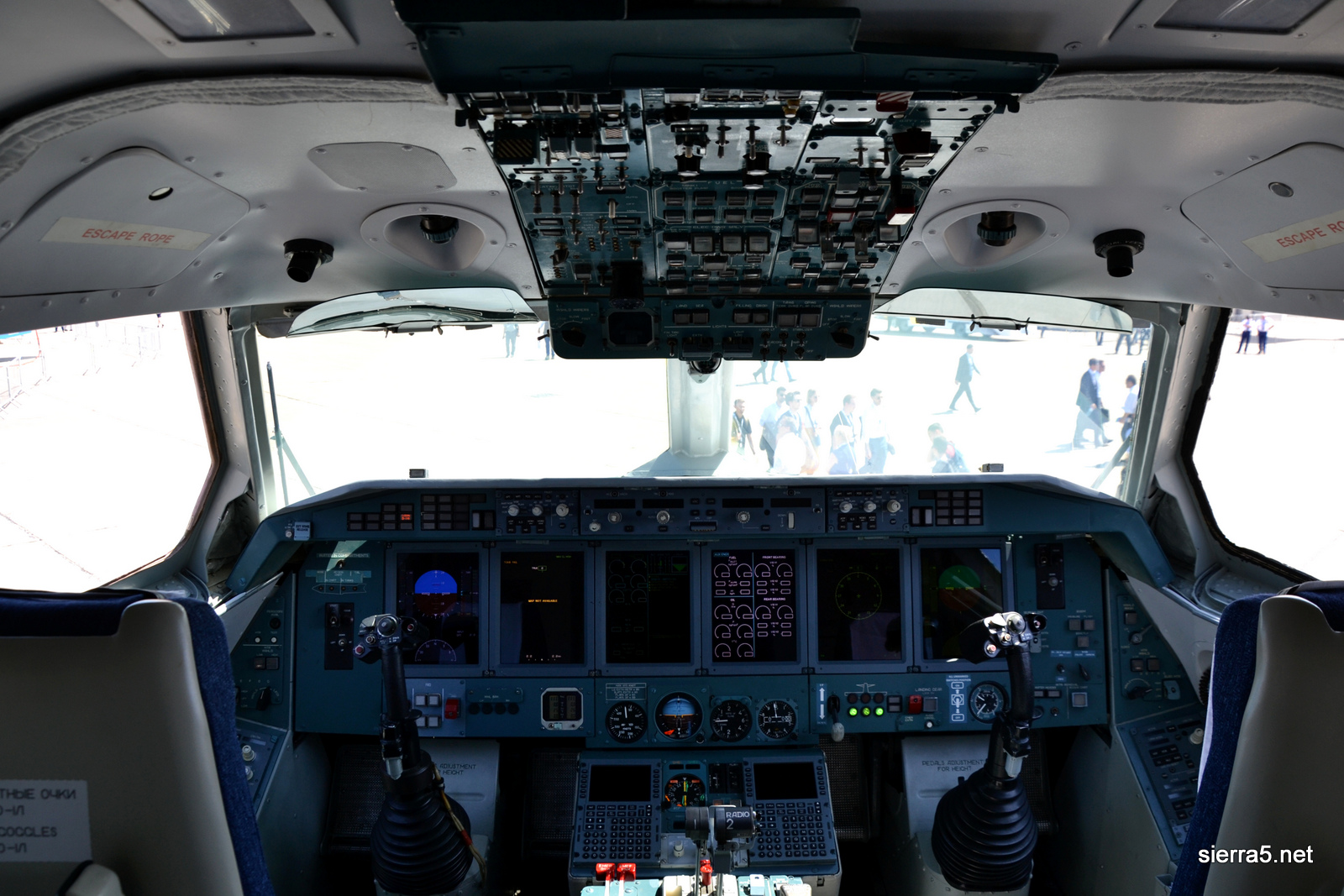 The cabin had a mixed configuration to carry passengers, with some spacious tables to use for meetings. The Be-200ES can carry up to 44 passengers. 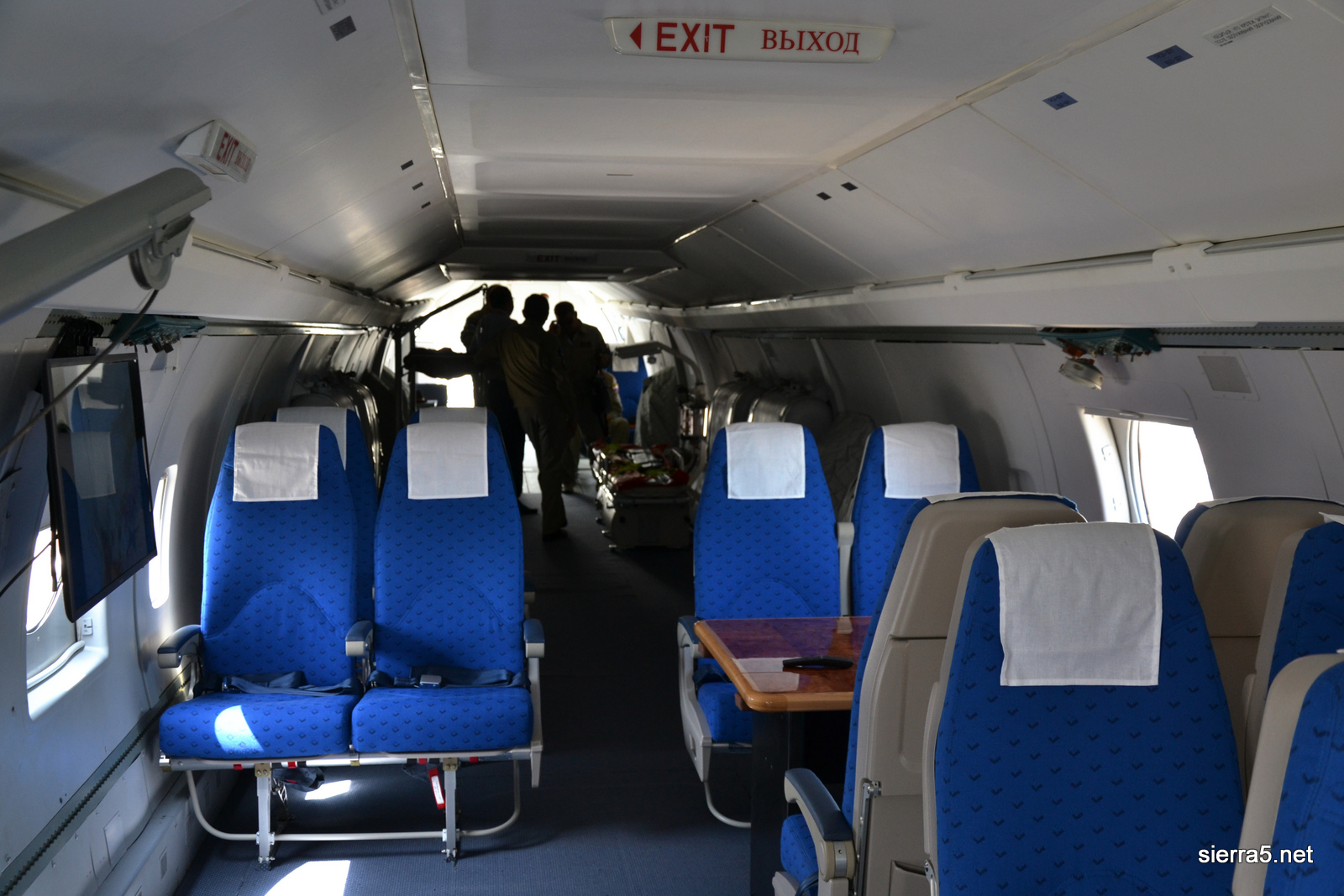 The other part of the cabin was prepared as air ambulance, with stretchers for the injured and some medical equipment. 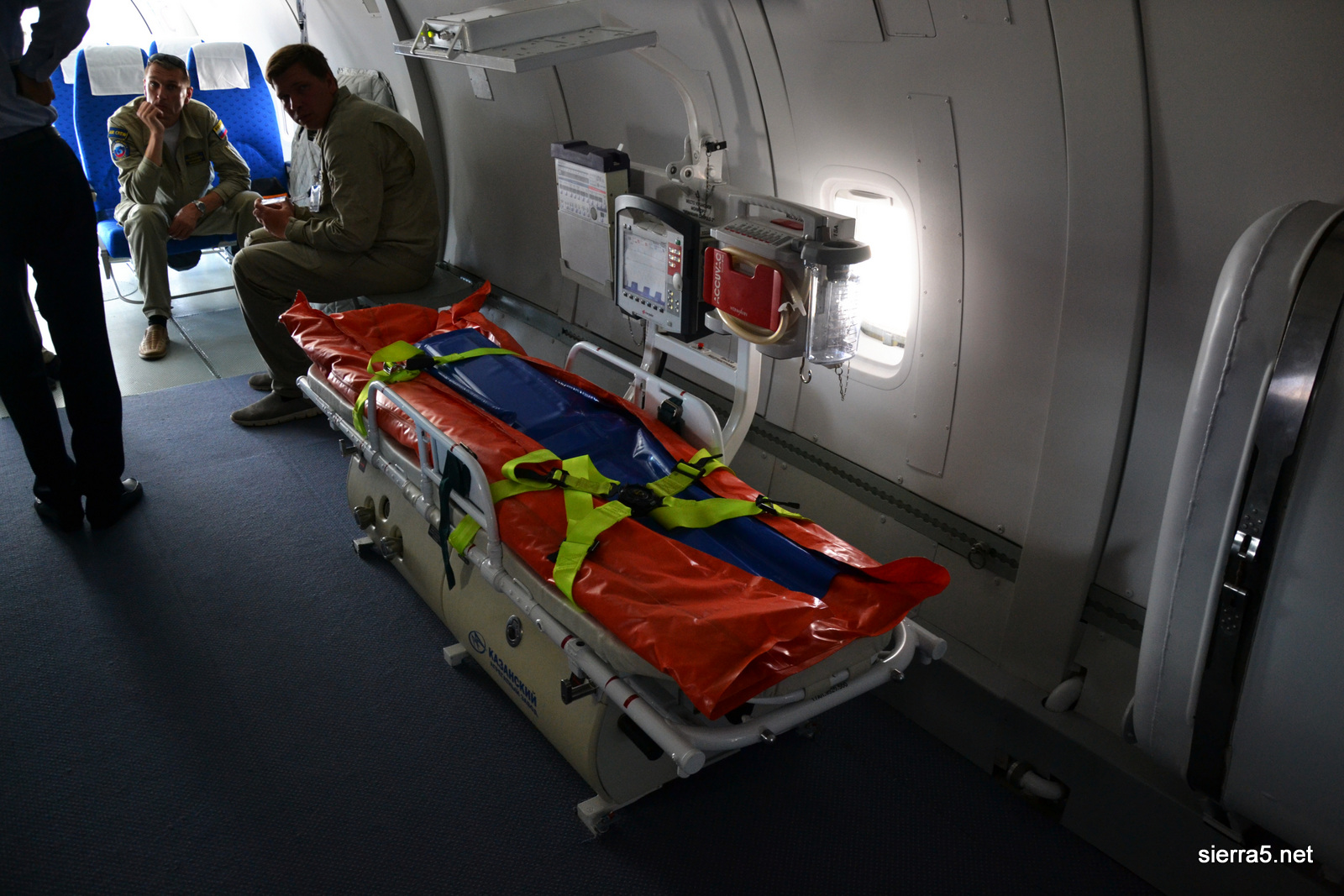 The cabin fits various reservoirs for liquid chemicals, used for firefighting. The total capacity of those reservoirs is 1,2 m3. 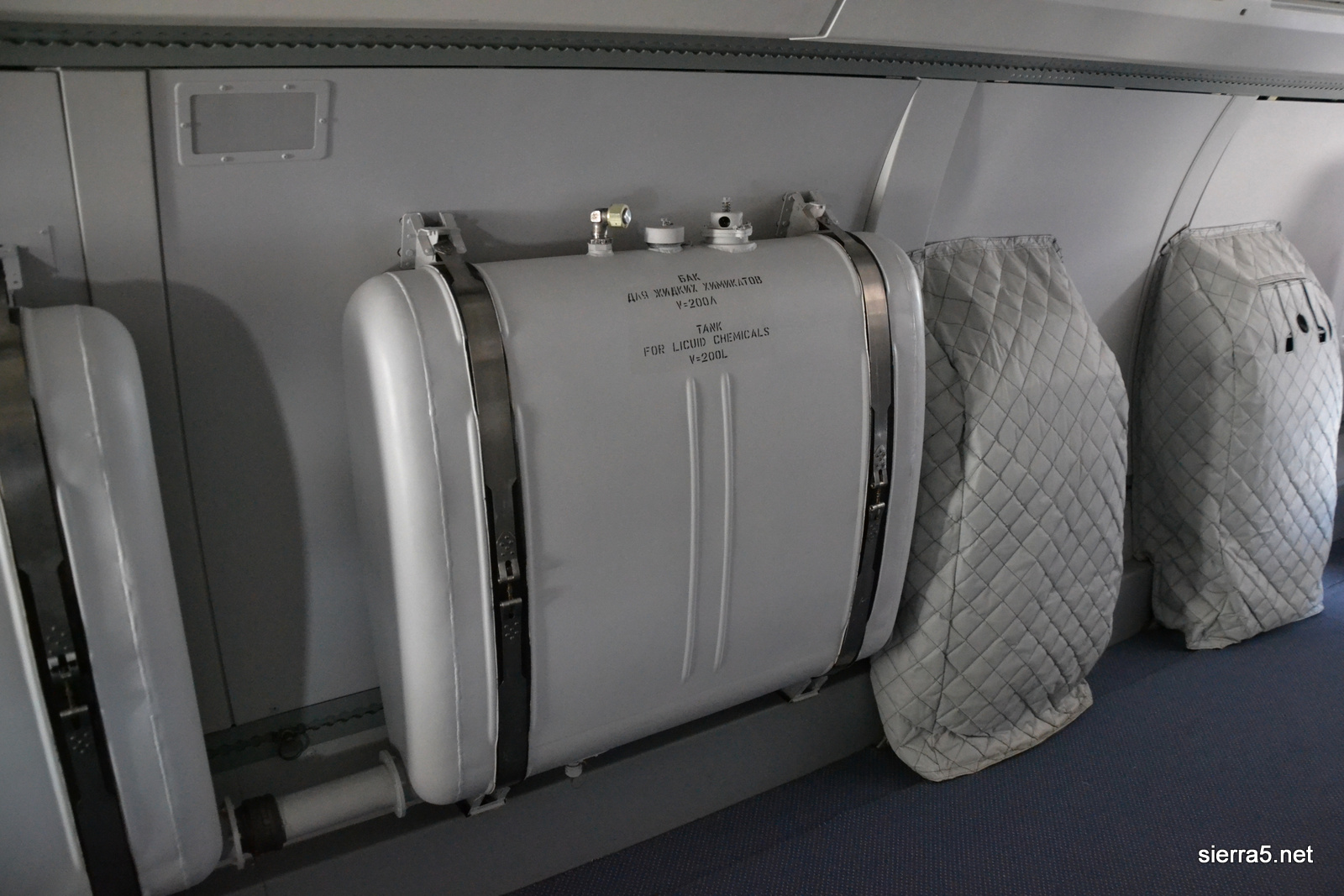 In the last few years the odds finally turned good and after a long gestation Beriev will finally have some commercial success with its firefighter. The plane is now proven and has some discrete chances to win various competitions and achieve new orders around the world.